Another year, another crop of Stephen King movies. 1993 saw three King flicks hit theaters/television and for once, they were all pretty good. The TV movie released was a multi-night adaptation of The Tommyknockers. You see, back in the day, books were often turned into multi-episode, multi-night mini-series. These were almost always on network TV, think ABC/CBS/NBC, and were almost always a big deal. Nowadays, we see trilogies as the way most longer form books get released. Anyway, The Tommyknockers was a story about about a fiction writer and a poet who discover a strange green object in their backyard. As they dig it up, since neither is writing, they discover it connected to a series of tubes. Naturally, strange things begin to happen in town and only the writers can save the day. Definitely worth the watch and something I’d personally love to see remade. 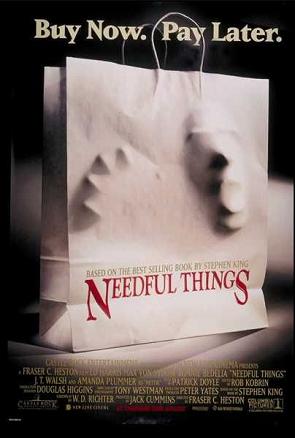 The two films released in 1993 based on King works were The Dark Half and Needful Things. The Dark Half was directed by George Romero and starred Timothy Hutton in both roles. For those who don’t know the story, Hutton plays a writer who is more successful under his pen name (Stark) than his own (Beaumont). So, he decides to bury the pen name. Which, okay sure, is cute and all except the Stark name becomes physical and starts terrorizing the small Maine town where Beaumont lives. To be honest it gets pretty ridiculous after that and there isn’t enough space in a post like this to properly explain it. Needless to say, you should definitely watch this flick. It is played quite well by Hutton and is a more interesting take on the “zombie” genre than many others. Needful Things is one of my favorite King adaptations of all time. In the film, Leland Gaunt, played by the always brilliant Max von Sydow, opens up an antique store in Castle Rock, Maine that somehow seems to have the one object you want most for sale. (for a tiny price and a harmless prank) As time goes on however, the pranks become less and less harmless and Gaunt gains more and more influence over the town and its people. I won’t spoil the ending here but would suggest you seek this film out immediately. (and that you read the book)

The rest of ’93 leaves a lot to be desired. Things like Leprechaun and Man’s Best Friend just didn’t work for me. (or anyone really, judging by the numbers…) What did hit though, and hit hard, was Army of Darkness. The final chapter of the Sam Raimi/Bruce Campbell film trilogy, Army of Darkness was the big-budget sequel, for the time anyway, that we wanted and frankly, deserved. The movie picks up right where Evil Dead 2 left off with Ash being transported to the middle ages. Ash immediately gets involved in the fight between Lord Arthur and Duke Henry with Ash proving himself a hero and getting the girl. (Sheila) Hilarity and tomfoolery ensue with Ash ending up resurrecting the Army of Darkness and subsequently losing the girl. Given the time period and budget, Army of Darkness was everything we could have hoped for. It is simply brilliant.