Probably the biggest movie to come out in 1999 was The Blair Witch Project. This movie took the world by storm when it hit theaters. It was so very different from anything that had come before. It has been shamelessly imitated since its release, but nothing has quite matched the original found footage movie. This flick was absolutely terrifying. It felt so damn real. And what’s really impressive about it is that there are no big scares, no big gross out moments to be found. It relied on simple, tried and true film design to scare the pants off of its audience. It left you guessing; about whether it was real, what had actually happened, and what was going to happen next. It’s a brilliant film that fully deserved the hype. 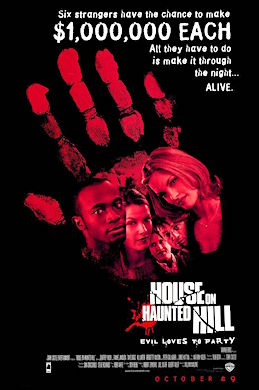 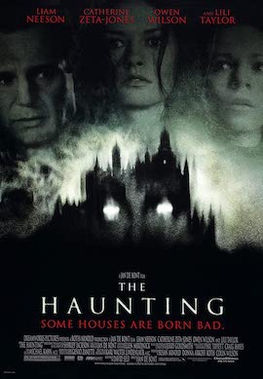 It wasn’t just found footage movies that set the tone for 99. There were also haunted house movies aplenty. (2, but really, that’s aplenty) One of those, House on Haunted Hill, was set up with the premise that a multi-millionaire would give a cash money reward to whomever was able to stay in a haunted house for one night. This film, a remake of the 1939 original, upped the scare factors with lots and lots of creepy characters and jump scares. There’s an interesting bit of who done it between the characters and some cool visuals. It’s not a perfect movie by any stretch, but it is a pretty good time. The other, The Haunting, is different in premise and scare tactics but enjoyable all the same. This flick, also a remake, is based around the idea of psychological experiments of the unethical sort. Liam Nesson’s character is out to study the effect of fear on the human mind under the guise of a sleep study. It’s a movie that is pretty universally panned, for some good reasons and some not so good ones, but does make for a fine piece of a double feature. 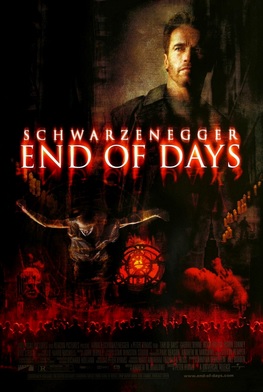 99 also saw a number of animal based horror movies released. None are really worth much in my opinion, but if scary animals are your bag then Bats, Komodo, Lake Placid, and Deep Blue Sea might be just the thing to satisfy that urge. What is my thing though is end of days type movies, so it is only natural that I talk about End of Days. This movie, starring Arnold Schwarzenegger, is one of his absolute best. In it, Arnold plays an NYC detective who saves a banker from being killed. He is then thrust into a weird religious conflict where he has to save an innocent stranger, played by Robin Tumney, from being forced to give birth to the anitchrist by having sex with satan. So, not your typical Arnold fare but that’s what makes this one so interesting. There are some really cool visuals on display and the acting, particularly from Arnold, is quite good. The story is ultimately nonsensical, as most of these types of stories are, but the surrounding bits are good enough to cover for it. This is one that a lot of people missed out on and that is something you should definitely handle when you have the time.

There are quite a few other movies from 99 worth your time including Sleepy Hollow, with a wonderful turn by Christopher Walken as the headless horseman, The Sixth Sense, you see dead people? do you?, Storm of the Century, always scary when a town is shut off from the rest of the world and there is someone out to do harm, The Ninth Gate, solid work from Johnny Depp, Ravenous, who’s hungry?, The Bone Collector, serial killer=scary, and Stir of Echoes, excellent work from Kevin Bacon in a thought-provoking and sobering movie. The scariest movie from 1999 though, is Audition. I can, and will at some point, write a much more in-depth look at this film. Suffice it to say, Audition is a movie that sticks with you for a long, long time. The premise of the film is that a widowed man is going to audition women for the role of his new wife at the urging of his son and friends. After interviewing quite a few women one in particular stands out. She, Asami, is not quite what she seems. All of her references are unavailable either due to being missing, dead, both, or mutilated. Asami is shown sitting in her empty apartment, save for a phone and a body bag, waiting for a call back for four days. She does not move for those four days. When she receives the call she agrees to go on a date and makes said widower, Aoyama, promise to love only her. However, when she finds a picture of his deceased wife later on, she loses it, drugs his drink, and tortures him. (the bit with the piano wire… man…) Well, maybe she does, because there is some ambiguity left in the film. It is a masterpiece from Takashi Miike and one of the scariest movies I have ever seen. I can promise you that it is unlike anything you have seen and it will leave you thinking. You need to see this film.