In the interest of full disclosure, the next few days are going to be pretty bleak. The early 2000’s were not good to the horror genre, at all. I’m not entirely sure what happened but things came off the rails in a big, bad way. Point of fact, 2001 has two films worth mentioning. Two. 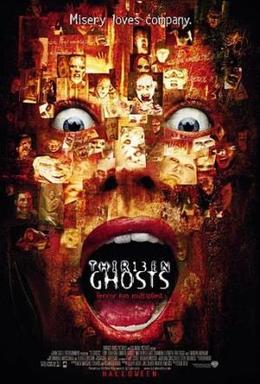 The first movie worth talking about is a remake of a classic, well classic-ish, horror flick. Thirteen Ghosts is a remake of the William Castle film 13 Ghosts that upped the gore considerably. The story is that a ghost hunter and his assistant are capturing ghosts and holding them in a mansion with barrier spells written in latin on glass panes in the basement. The ghost hunter is killed on his quest to capture a 13th ghost named the Juggernaut. Upon his death, his nephew and his two daughters move into the mansion. As you can imagine, things go sideways at that point and the scares begin in earnest. The house is sealed through an admittedly silly plot device, and the ghosts begin to come out one by one. It is not a great film by any stretch, and in most others years wouldn’t even be talked about, but it is a damn fine looking film. The ghosts are really cool looking, the sets are interesting, and the overall production is fantastic. It’s worth a watch if for nothing other than that alone. 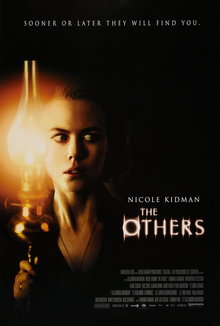 The best flick to come out in 2001, and one of my all time favorite ghost stories, is The Others starring Nicole Kidman. The film is insanely clever and because of its intricate plot I cannot talk too much about it. What I can say is that Kidman plays a widow and mother of two children living in a country house immediately following World War 2. Her children suffer from photo sensitivity and therefore cannot be exposed to certain light. She has three assistants that work for her but question her as well. I urge you to watch this movie as soon as you can. It is remarkable how much is done with so little in this movie. It is simply brilliant.