2004 started a bit of an uptick for horror movies. First of all, there were a ton of movies released this year worldwide and a lot of them were pretty good. The three I want to talk about today though stand out above the rest. And the first of those is the remake of Dawn of the Dead. This movie is absolutely terrifying. It starts off with that incredibly sad and poignant scene of the little girl, who happens to be a zombie, eating her parents. Which, I get seeing it written out, sounds a bit silly but it really is heartbreaking. What follows from there is not a shot for shot remake of the original but a beat for beat remake with modern sensibilities. The movie is stylish as hell, it is a Zack Snyder pic after all, and the zombies themselves are very well done. This movie earns its creepiness with the atmosphere it creates. The choices made work. This movie really makes you feel for the characters and the world they have created. Great stuff. 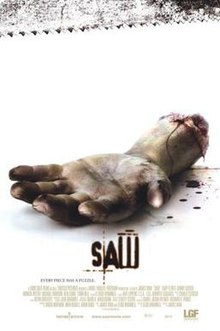 Another super solid flick from 2004 was the first, and by far the best, Saw. Saw did something not a ton of movies can claim, it added a spoke to the wheel of the horror franchise conversation. Saw is respected, for the most part, and looked forward to and back on reverently. And that all comes down to this first film. Director James Wan made a movie that was, to a certain extent, gore porn, but did so with heart. The plot, two strangers wake up in a room they don’t recognize with no idea how they got there and one is told to kill the other, isn’t the newest, most original idea. But what really makes it shine is the performances from the actors involved. There is real struggle on display here, real hardcore decision making. It’s a brilliant exercise in the limits humans will go to save themselves. The sequels not withstanding, the first Saw is absolutely worth the time you spend with it.

Finally though, and on a bit of a lighter note, Shaun of the Dead. A comedy at its core, Shaun of the Dead is the film that broke Simon Pegg in the states and made him a household name. And for good reason, this movie is amazing. The cast itself, Pegg and the rest of the Edgar Wright players, do such a phenomenal job of playing a broken family trying to keep their shit together through the end of the world. Bill Nighy as the step-dad is so heartbreakingly beautiful in this film. Nick Frost as the sacrificial best friend is tragic and moving and redeeming all at the same time. The horror here, the end of the world through a zombie apocalypse, is more of a character than a plot device. The direction of the film, by the always brilliant Edgar Wright, is elegant and simple and complex and flawless and everything. This movie just hits on every level and, let’s be honest here you’ve seen it already, you need to see it again. Now. See you tomorrow.