Way back in 1997 while you were jamming out to “Barbie Girl” by Aqua, there was something equally weird going on in a rented San Diego mansion. Thirty nine people wearing sweet Nike Decades were busy drinking their last call cocktails on their way to, what they believed was an alien spacecraft traveling behind a comet at its closest point to Earth. For those of you who are too young to remember, this was the Heaven’s Gate cult let by their enigmatic leader Marshall Herff Applewhite who looked like he could see through time.  For everyone old enough to remember, it’s a story that we will never forget. 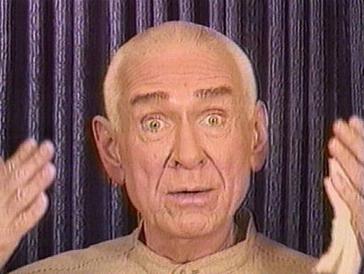 It’s this memorability that made me so excited to listen to the “Heaven’s Gate” podcast, a show that was recommended to me by a friend, at a funeral no less. The premise is simple: lift the veil. Tell the story of the cult in depth. The show’s goal was a bit more ambitious. This wasn’t some book report on Heaven’s Gate. The real challenge the show put forth for itself was to show that this wasn’t just a group of loonies or a cast of crazies. A valiant effort was put forth to show that this could have just as easily been you wearing those sweet ass kicks under the right circumstances.

Heaven’s Gate was produced by Stitcher in collaboration with Pineapple Street Media. It’s a ten part series, and each episode clocks in at roughly 40-50 minutes. Believe me, you’ll chew through this pretty fast, especially on a road trip.  The show is hosted by Glynn Washington. You can tell right away this topic is of great importance to Glynn as right off the bat he admits, he himself, is a former cult member. In fact, there’s an entire episode devoted to his experience living in a cult.

What I liked most about this podcast was the reverence it gave to the topic. For the uninitiated, in a nutshell, the Heaven’s Gate Cult literally believed that the Earth was coming to an end, and salvation involved shedding their human form and being picked up by a UFO. Wow. A honestly, that sentence doesn’t even do it justice. Never mind the whole mess (spoilers) ended in a mass suicide of 39 people, with a few that showed up to the UFO Rapture fashionably late, this is one of those news stories that’s so out there it’s hard to keep the tragedy front of mind. The Heaven’s Gate Podcast pulls this off by not only recognizing the absurdity of it all, but grounds you with personal stories. Interviews with parents of the departed leave you feeling their pain. Putting myself in their shoes, I’m overcome with frustration.  Listening to their recorded phone conversations, while their children are in a brainwashed state, exposed their helplessness. The Heaven’s Gate Cult had been around since 1974 so there’s plenty of surviving members, both those that left the belief system, and those that, for one reason or another, never took that final step. Both groups are represented on the podcast.  We also get expert interviews in cult behavior, history and methodology.

There’s so much packed into these 10 short episodes you’ll want to keep driving so you can binge more of them. While I don’t think Heaven’s Gate quite got me where Washington wanted me to go, (understanding that in that era of UFO-mania and Sci-fi fascination, in college, with a lack of direction, I could have fallen victim to being lured into Heaven’s Gate, or another cult like it), this is still one of my favorite podcasts of the year, and I can’t recommend it enough. Give it a chance, at the very least it’s an example of some excellent reporting, especially for being twenty years later, and a cool opportunity to hear first-hand accounts of an experience most of us well never have.

Finally, I’m left with this thought…….there’s some chance……no matter how infinitesimally small…..no matter how ridiculous it may be……

Nah, they weren’t right, were they?