Over 3.5 million dollars, that’s how much money Pro Wrestling Tees has paid out to independent wrestlers since they opened their online shop. That’s money spent by fans going to wrestlers directly. And in an industry fraught with risk and little to no health insurance readily available (before, and now I suppose after the ACA), that money matters. Your support of these wrestlers matters. And, AND, you get a pretty sweet shirt out of the deal as well. It all started with a custom t-shirt shop and C.M. Punk. 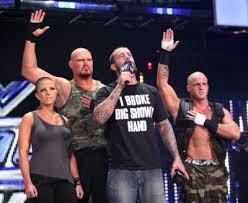 In 2010, Punk was involved in an angle as the leader of the Straight Edge Society, the SES. It was an angle that, like so much of WWE over the years, was good but not as good as it could have been. It did give us Luke Gallows, instead of the nightmare that was Festus, and a return for Joey Mercury. Serena Deeb also got some time to shine but honestly, as a female wrestler at that time in WWE, well, it wasn’t the best of times. One of the feuds running through the stable was Punk and Big Show. In kayfabe, Punk broke Show’s hand. Being the kind of guy that he was, Punk wanted a shirt that said, “I broke Big Show’s Hand” on it to wear to television. As far as research tells me the story goes that Punk had the idea, told it to his friend Colt Cabana, who happened to know of a shop in Chicago called One Hour Tees that promised high quality shirts on a quick turnaround. Cabana told Punk, the shirt was made, everyone was happy, and Cabana, being the marketing guru that he is, had a bunch of “I Star of David Colt” shirts made to sell at indie shows.

See, back in the day, the only wrestling shirts we could get were, if we are being honest, awful. It was a time of super bright colors, designs that made no sense, and terrible quality. These were the types of shirts that were not cool, even among other wrestling fans. (And I know there are some of you reading this thinking, “no dude, that Razor Ramon shirt is, in fact, cool.” It isn’t) There were a few cool ones in the mix but for the most part… nothing but awful. But then the NWO and DX came along and, while there were still some terrible design choices, for the most part we got some pretty cool shirts. ECW also hit big around this time and had some decent shirt designs as well. Unfortunately, as all things do, wrestlers moved on, stables changed, and we were left with some average to sub-average merchandise for a decent chunk of time. It wasn’t until the independent scene really took off, to the point where wrestlers could actually earn a respectable living outside of WWE, that we got good shirts again. That’s thanks to guys like C.M. Punk, Colt Cabana, and Pro Wrestling Tees.

So do yourself a favor and head over to Pro Wrestling Tees’ site and give them a browse. If you’re a fan of professional wrestling I guarantee there’s something there for you. If you’re in Chicago, head on over to their retail store located at 2348 N. Damen Ave., open every day from 10:30 to 5:30 except Sundays because, as they say on their site in numerous FAQ’s, it isn’t really about you or your needs. (It’s a seriously funny read on One Hour Tees, check it out) And check back next week as we start 2018 off on the right foot by taking a look at a wrestling faction. 2017 featured games every month, in 2018 its factions. I love factions, you love factions, everybody loves factions. If you have a minute please like and share this post and follow me on twitter and instagram, @geekadedan, where I promise to start posting more than just pics of my kids and the beers they make me drink. Until then…